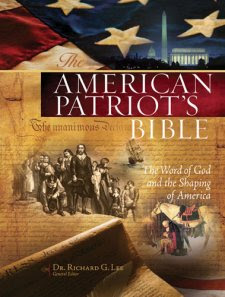 My next book review opportunity for Thomas Nelson Publishers is The American Patriot's Bible. I received this book free through the Book Review Bloggers program, at http://brb.thomasnelson.com.

So, what about The American Patriot's Bible? Well, what you have a is a hardcover New King James Version Bible. The added content involves brief episodes and quotes from American history, primarily from the Colonial Period through the establishment of the Constitution. There are also other quotes from American leaders, especially Presidents, and the publication is fresh enough to include President Obama.

How you might enjoy this Bible depends on your expectations. If you are looking for a study Bible, that gives you verse-by-verse insights, this is not the Bible for you. While each book does have an introductory page featuring authorship, dating, and theme information, these pages do not have a discussion of authorship, dating, and theme. For the Pentateuch, as an example, Moses is given as the author, with "around 1400 B.C.' as the dating. For the record, I think they're right with this information, but this is a debatable issue in Biblical studies. Also, a few verses have notes on them, but these are fairly sparse. Typically, these notes are found with verses that have been cited by prominent people in American history.

If you want a glimpse into the impact of the Holy Bible on the founding of America, this Bible is for you. There are a dozen full-color sections highlighting various times in American History, usually with a brief essay and then specific quotes from people like John Adams, George Washington, and Ronald Reagan. These are very insightful, as are the notes in the text regarding where various Presidents have had the Bible open during their inauguration (some Presidents picked specific passages, some had a closed Bible).

Overall, the text is easy to read, the binding feels sturdy, and the family info section in the front makes a good argument for using this as a family record Bible.

The drawback to this printing of the Bible, to me, is the juxtaposition of the Sacred Word of God with scenes from American History. To be honest, I'm a little uncomfortable with it. I'm not against study Bibles that illuminate the text, but to me, this Bible seems more about America than it does about the text of Scripture. I understand what they're trying to do in showing how the Founding Fathers of our country, and some of our greatest leaders since then, were convinced of the necessity of Scripture for American life. I think the information is good, although one might find that the quotes are cherry-picked, giving only the better side of our Founding Fathers. I would prefer this information in a separate book from the Word of God itself.

A further concern to me is that, given our country's current political situation, a Bible pointing out that we are a Christian nation, or at least once were, coming out so close to our President declaring that we are not a Christian nation, might be getting a little close to playing politics with God's Word. I know we stand for truth, but I don't think we should be mixing Truth with even so prominent a man as George Washington. Preachers should stick with the Bible, there's enough in the plain text to show the errors of our ways as a nation.

Also, from a practical perspective, you can't really use this Bible in missions work, can you?

I give it 3 stars. It's a well put together book. And some people may really like it. But it's not really for me.