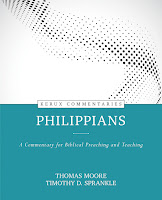 Today’s book is from Kregel Ministry and is the first volume I have in the Kerux Commentary series. The overall concept is that a pair of authors will work on each volume in partnership: one an exegetical author, one a homiletical author. In other words, one author to focus on the Biblical studies concepts and one to help guide the teaching and preaching concepts.
In that light, the Kerux series fits into the category of a homiletical commentary rather than a technical one, fixed on details, or a devotional one, fixed on application.
Now, I have the Philippians volume, so I’ll take a look at the features through what this volume shows. It’s one of the first volumes released, so there may be some adjustments in format going forward, but this is where it starts.
First of all, the book is broken down into segments of text intended to be preaching units. Each of these units are then presented with an exegetical idea, a theological focus, and a preaching idea. The text then fills out details in support of the exegesis and preaching ideas, with pointers on how to illustrate or strengthen the preaching and teaching of the passage included.
The preaching passages are derived from the outline of Philippians given by the authors, which divides Philippians into 6 major sections. Each section has at least 2 sub-units, with the Kerux Commentary giving a total of 18 suggestions for sermons.
Generally, the viewpoint adopted by the Philippians authors is the conservative, evangelical one: Paul as the author, Rome as the place of authorship, and so forth. The introductory materials deal with some of the arguments and discussions, but mostly in explaining why the authors see no good reason to jettison the tradition.
I like the structure and content. At various places, there are shaded boxes to highlight exegetical information. It’s not quite as awesome as full-color would have been, but printing costs what it costs and going color would likely push these out of the reasonable price point.
Overall, this looks like a good series coming. This volume, Philippians, is definitely a useful one.

An igniter, a broken oven, and a sermon illustration

Last week, I was at the North American Mission Board’s Timothy-Barnabas Institute, which is worth its own discussion for a later time. However, as typically happens when one or the other parent is out of our house, something went wrong. In our case, it was the oven.

Not the range, just the oven. It would not light, would not fire up. The electronics were working fine, but no heat in the hot box. Ann and Steven poked and prodded with it a little bit and they suspected the igniter.

What is the igniter? Well, in our not-2-year-old gas oven, it’s an electric glow element that is attached to the gas jet pipe in the oven. You turn on the oven, the igniter starts glowing and then the gas starts flowing in, which is then lit by the igniter. The igniter shuts off and the flames from the gas pipe heat the oven.

So, once I got home, I pulled the igniter out and tested it with a continuity tester—it’s an electrical part, so you can determine if it’s working by checking the power—and they were right: the igniter was bad. Fortunately, a modern oven has a safety switch which prevents the natural gas from filling the oven when it won’t light. Otherwise, we might have had a bigger problem.

We picked up a new igniter, replaced it, and the oven is back in action. But, I am a preacher, so what do I think we should learn from this? Other than oven repair, which is a valid and necessary skill.

Well, here we’re going into an analogy, so it’s not going to be theologically perfect. Alright? Alright.

In your life, and in the life of your church (yes, it’s Jesus’ church, but it’s also one which you are part of, in the same way that the Atlanta Braves are MY baseball team despite me not playing baseball or owning the Braves), you need some points of ignition.

Many times, though, we live our lives like my broken oven: the power, the Spirit of God, is present and willing, but we leave out the ignition. And then God uses others, works in other places and other ways. Why? Because if we don’t behave like we want God to work, why would He continue to bother us? We overload our belief in the sovereignty of God to think that we can sit on the couch and He’ll just zap us into service; zap us into unity; zap us into proclaiming His name among the nations.

What is that igniter?

I think in many of our churches, it’s prayer. It’s a willingness to spend more than a scintilla of time in prayer and seeking God’s direction, God’s power, and trusting Him to do what He has promised. We program, we plot, we develop…we need to be more about praying.

We need to pray like an oven needs an igniter: we need to recognize that until we have prayed through the work and seen God spark something from it, we have not finished praying.

That’s one of my personal development goals for 2020: do more praying and less of…everything else. Less complaining. Less striving with others. Less scheming, planning, strategizing…and more praying.

First of all, we’re moving our church sermon audio feed over to Faithlife Proclaim Sermons as part of an overall update to our digital life. We have several digital tools that are included in what we are already paying for as a church, so we’re going to use those instead of paying for extra ones…there may be a speed-bump or two in the process as I figure it out.

Email ThisBlogThis!Share to TwitterShare to FacebookShare to Pinterest
Labels: Sermons

Here’s to a new year and the hope to, this time, keep up with the blog…

We’re going to be working through Acts, and continuing our look at 1 Timothy for now. We are going to see what Scripture says about what a church is, and about the qualities and characteristics of church leaders.