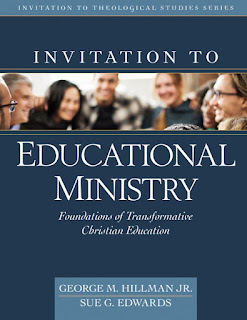 What does it look like to make disciples within the church? While there is a strong case to be made for the importance of one-to-one relationships that cannot be ignored, there is also a definite role for organized educational ministry within churches.

That is where today’s book, Invitation to Educational Ministry, comes in quite handy. The work is edited by George M. Hillman, Jr., and Sue G. Edwards, who assembled contributions from more than a dozen of their colleagues at Dallas Theological Seminary.

First, let’s be clear about what Invitation is. It’s a textbook. Some of you will immediately start to fade away, because in your mind “textbook” is equivalent to “boring, useless, old.” One cannot hold the editors, or Kregel Academic Publishing, responsible for your poor prior experiences with textbooks. Textbooks are simply compiled resources intended for use in teaching—and this is a book compiled to teach about teaching. And you need it in your ministry.

Why?
Because, fundamentally, organizing for educational discipleship is a wheel you do not need to spend the time re-inventing. Edwards and Hillman have shaped this book to start with the foundation of teaching—who does it, why do it, and what are basic principles, then move through the specifics of various populations and onto concepts of leading and teaching small groups.

Each chapter is put together by a contributor with experience in its specific field, such as youth or children’s ministry, or experience in senior adult work. All of the chapters provide both theory and discussion questions to help cement your understanding of the material.

For the minister already at work, trying to reshape a stalled church education program, chapter 21 turns out to be the most useful—it provides worksheets to help you walk through a process in your church.

All-in-all, Invitation to Educational Ministry fits well with the rest of Kregel’s “Invitation” series: all-encompassing works that help beginners and experienced workers grow in their understanding of a field, with plenty of guidance for further study if desired.

I received my copy of this book from Kregel Academic in exchange for the review.
at April 29, 2020 No comments:

It’s April 2020, and there’s a pandemic. That’s right: in the midst of the 21st Century, there is a destructive virus that has people staying at home, glaring at each other from behind masks in public, and gutting the economy not just of one country but most of them.

A few thoughts on that situation, overall:

1. The last major global pandemic was the Spanish Flu of 1918. This hit the world while World War I was still happening, so that was an even more disastrous situation than this one. What I find interesting: we are dealing with the COVID pandemic with the exact same strategies that we had for 1918: isolation, basic hygiene, and more isolation. It’s been over 100 years and we are no further ahead in dealing with viruses. As a general curiosity: have we not invested in the necessary research or is it just impossible to deal with viruses? We’ve got medicines for all kinds of other issues…but this virus is from the same family as the common cold and we’re faced with the same measures we could take a century back. Not that I’m against hygiene: WASH YOUR HANDS!! though, shouldn’t have to be a public service message. Because we’ve also had a hundred years of government-directed, universally-mandated education, and if we’re still sneezing on each other and not washing our hands, folks, something is just not right there…

2. Globalization is a great thing, but there are definitely some safeguards needed because of the rapidity of transmission in international travel. And we should be careful of surrendering national safety to international bureaucracy: the bigger the bureaucracy, the more power it has to screw stuff up: your local city council may be inept, but they have very little power—amplify the power and ineptitude to a global scale, and you get the UN. There are always competent people somewhere in bureaucracies, though, so you have to figure out the safeguards against self-serving nonsense. This is why you have public health people at multiple levels: county, state, nation, world, all to study and also deal with findings from third-parties. Universities should be good places for research, but that era seems to have passed away.

3. The uneven distribution of COVID issues are part of why we have a state-to-state system in the US. New York has had some very bleak situations; Arkansas has not seen it as bad. Further, the population density, which affects disease vectors, is radically different in Little Rock than it is in New York City. So…the solutions for Arkansas end up looking different. You can allow some things in Arkansas that would be akin to murder if you said New York had to follow the same pathways---because many Arkansans still live in rural areas, while New Yorkers are in much more constant physical contact. Their state needs to do things differently. We still need to respect each state’s needs and be good neighbors, but we cannot copy each other’s homework here.

4. This is probably the strangest turn of events in ministry that I’ll see. Right now, we are not meeting physically, which means we’re mainly reaching those people who have technology connections. I’ve long disliked overusing technology for church, believing it disconnects those with less money to buy-in and those with fewer opportunities to learn and use technology. But here we are: reliant on it. I think this means that long-term churches are going to need to increase some of the “life skills” used in discipleship: if we are living in a digital world, then making disciples must include helping with basic connection and communication tools for living in that world. We have left people behind with the digital pivot, and that is not acceptable.

5. This will further push the economy toward gig/part-time/pay-per-activity types of work and away from both salary and hourly engagements. I think we’ll see some economic and tax structure changes because of it, and given the almost criminal disdain for people shown by both the Legislative and Executive branches of the US Government, that worries me.

That’s just some thoughts on April 28, 2020, as I start trying to process “out loud” through my keyboard.

Another Covid-19 Weekend, another batch of services on the web. Here are the embedded replays of the whole service for Sunday AM, PM, and Wednesday night.

Well, there’s always something odd happening with the sound system at church, so there’s no audio-only recording from yesterday. But we do have the videos. Here they are:

Service and Sermon Recap for April 12

Actually, this week I goofed up the audio feed. You’ll have to grab it out of the service video. As a word of advice, we start streaming 5-10 minutes prior to service start, so I’ve got the videos programmed to start at those points. You can back them up to see the announcement scrolls.

Morning Reflections from all week: