I thought about making another thought-provoking year-in-review, next year-in-preview post today.  However, there's work to be done with the brain, and it's not going smoothly.  So, I thought I'd post this for you.  It's a review of some of the stuff I've acquired in the last year.  Some is awesome, some is quirky.  All of it is a challenge: do I have stuff, or does stuff have me?  Will I use these various gadgets for the glory of God or am I hiding behind my stuff?

These aren't in any order of preference, cost, or amazing-ness.  They're just in the order I put them in the blog post. FYI: If it's an Amazon.com link, it's probably my affiliate link, if it's not Amazon, it's not an affiliate link. Not trying to profit from any of this, just thought it would be fun.

First item: The Chop-Stir!  Ever have trouble when browning ground meat?  You can't get it quite chopped up and stirred up and well browned? This thing is the solution: 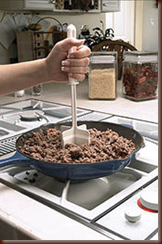 It's like a combo-spatula and chopping blade that's dull enough for non-stick, but sharp enough for ground meat.  This is one of the better $6 I've ever spent for a kitchen tool.  It's also handy for mixing frozen juice concentrates.  I have yet to duct-tape it to my drill for power usage, but I'm thinking about it.  Need to give a low-cost unique kitchen gadget as a gift?  Give one of these.  At the least, it won't be returned

.  I don't know if these are available from anywhere other than Chopstir.com, but the price isn't too bad.

Next item: The Amazon Kindle. Yes, I bought an e-book reader.  And I love it. Though I will say that I don't want to see these things replace real books, this little gadget is nice.  I now use my Kindle to store sermon notes, school info, and I've taken up about half the space with free books.  I'm not fond of the "experimental" mp3 player, it seems to lock up my Kindle.  However, they've now enabled lending on Kindles, which means I can borrow your book for 14 days or you can borrow mine.  Someday, I'll find a library that is setup for that, and I will be very happy.

Third gadget: Well, not so much a gadget as a software package: Logos Bible Software.  It's required for my seminary experience at Mid-America Baptist Theological Seminary, so I now have it.  This software has a multitude of translations, study resources, and very handily links it all together. Like the Kindle, though, this is no pure substitute for books, although if you could outfit laptops with it and distribute to English-speaking pastors around the world, that would be awesome.  If it hadn't been required, I probably would never have gotten it, but they may require it for that reason.  Anyway, good stuff.  Email me if you want more info.

Fourth gadget: TomTom One GPS (I think it's the "One" model).  This little gadget helps me find anywhere I want to be, except for my house, because it doesn't recognize the street number and the nearest intersection, well, it's misspelled.  But anywhere else I want to go, I can use my TomTom. It's been nice to have for finding my way back around from our new house.

Why? Because we eat a lot of rice, and also we're experimenting with a project called 30-meals-in-one-day, and that requires all of our pots and pans.  By moving rice into its own cooker, it saves a pot and space on the stove.

Sixth: Food processor.  We can grind all sorts of things! And shred cheese, and so on, and so forth.

There's various other things.  Thankfully, most of the gadgets above were bought via Amazon reward points that accumulated from buying stuff we need (like groceries) with a card that generates points.  Points lead to money to spend at Amazon, which builds the stockpile.

Now, to put this in perspective: there's not a thing on this list I'd go back into a burning house for, nor would I grab it and run for a tornado shelter.  However, if I were building a fallout shelter, most of this would go in it.  It's stuff, handy stuff, but not the end of the world.