CD Review: Downhere's How Many Kings 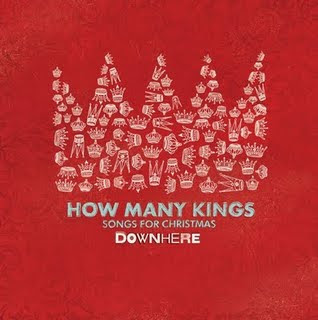 Christmas music is one of those genres of music that is very difficult to do.  People are thoroughly familiar with most of the traditional songs of Christmas, and most people have their favorites.  Many of those favorites have been recorded over and over and over again.  So, it's with a little fear and trembling that I approach Christmas albums from some of my favorite artists.  There have been some good ones and some duds.  I'll not name the duds here, but there are some artists that when I look at my iTunes play count, their normal music numbers are high, and their Christmas numbers, well, not so much.

Into this comes Downhere.  Downhere is a group of transplanted Canadians that, for the sake of their music efforts, live mostly around Nashville these days.  I have their debut CD, and, at the time, thought they were alright, a little quirky, but a decent band.  Then, I got their second one, and it was ok.  Since then, I've become a pretty solid Downhere junkie.  Ann and I have all of their main releases, including last year's Ending is Beginning which contained a Christmas song, How Many Kings.  Which leads us to this year's Christmas album, How Many Kings.

Well, what about it?  This album has a 13 tracks, although it's really only 11 songs.  How Many Kings is featured twice, and you'll need to listen to find the other "not really a song song."  Let's just say that Downhere found a way to evoke a song without singing one of the more annoying traditional carols out there.  4 of the tracks are original songs, which are lyrically strong. The musical settings are excellent.  These 4 are well worth the album itself, but in this day of downloading tracks, you need a reason to buy the whole thing.

That reason is found in the traditional carols.  Many Christmas music partakers are familiar with the melodies of Good King Wenceslas and Bring a Torch, but the actual carols aren't well known.  Generally, the setting of those carols has been handled with a very straightforward touch, and have been, well, boring.  This album rescues both of those songs for me.  The band obviously is having fun with We Wish You A Merry Christmas, as it sounds just as I would expect if they were caroling down my street.  What Child is This is well done, and Silent Night is really the only song on here that didn't seem to have a definite "Downhere" type of feel.  Which is ok, because if you're going to tinker with Christmas songs, you don't want to screw up Silent Night, lest someone tie you up with tinsel and beat you with an artificial tree.

This is a Christmas album that, if you don't want all of your Christmas music to help you settle in for that long winter's nap, you should add to your collection.  Available direct from Downhere or at Amazon.com, both as an actual CD and as downloads.  You can get it from the iTunes, but I don't know how to link from here into the iTunes store.  While I'm all for the band making more from their album, which I think they do if you buy it direct, I'd like to see it rocket up the Amazon chart.  So go buy it from Amazon.  Or from Downhere.  Or Walmart.  Just go buy it!!  4.875 stars out of 5, just because nobody's perfect.

Full disclosure: I once got a free Duct Tape Wallet from downhere, but that has nothing to do with this review.  In fact, I paid for my CD, like I've paid for all my downhere CDs, and will continue to pay for downhere CDs until I go totally digital and only pay for downhere downloads.  Therefore, no undue influence was had over the objectivity of this review neither was it sponsored or paid for by the band downhere, their promotional people, or their relatives.  While we recognize that rockstars need money, there is no bologna present in this review, for we indeed bought the album.  We have yet to be an audience for Downhere live, but our hope is rising that soon we'll be breathing in the air at one of their concerts!


And yes, it is necessary to disclose, for I can't afford an $11,000 government gone wild fine from the FTC for blogging inappropriately.
at October 11, 2009