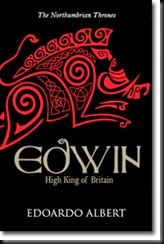 Every now and again, I read a book that causes me anger. Not anger at the book’s contents or presentation. Anger that the author wrote what I should have thought of first.

Edwin, High King of Britain is one of those books. Edoardo Albert’s work here fits, technically, under the definition of “historical fiction,” though I would recommend a category of “imaginative history” for works like this one.

Why? Albert presents us with seventh century Britain as a living place. This is a timeframe that we do not have many sources for—the Venerable Bede’s Ecclesiastical History being the main source for occurred in these years. If we take Bede’s historical work as accurate, then Albert’s work is accurate on historical events.

He has woven in imaginative descriptions of what goes on between events. Unlike a typical “historical fiction” book that is mostly fiction in an historical setting, this is mostly history with imagined events to bring it to life.

And bring it to life, he does. Throughout Edwin, High King of Britain, we are introduced to warp and woof of Britain as we can know it. His historical note at the end highlights the areas where he diverted from known facts and his justification for it. The deviations are reasonable.

Now, I’d prefer not to give you too many details. I can say that one thing you might hold as a criticism is the similarities in the behaviors of the Edwin and his people and how J.R.R. Tolkien portrays the Riders of Rohan. However, you must remember that Tolkien was an expert in…early Anglo-Saxons and early Britain. It’s not only reasonable for Edwin’s Britons and others to seem like the Rohirrim, it’s right for them to.

Albert works through the intrigues and battles that characterized life in the seventh century British Isles. Well, the main isle—Ireland has not come into play yet. It’s gruesome at points. Warfare often is, and a novelist is challenged to portray the reality while maintaining writing acceptable for his audience.

All of this being said, I like this book. It is the opening of a series, and I am curious to see if the series holds up in terms of quality, but I have high hopes. This should find its way into your reading if you are interested in early Britain or if you like a good intrigue story. A great read.

Publisher provided a free book in exchange for this review.