Book: Judges for You

Today’s Book is brought to you by Cross-Focused Reviews and The Good Book Company. Which brings to mind a question: I wonder if anyone’s ever started “The Bad Book Company?” seems like a bad call. Anyway.

Judges. This segment of Old Testament history is sandwiched between the success of Joshua and the romance of Ruth, and it’s not exactly the happiest book of the Bible. In all honesty, even Job gets a happy ending when God restored his wealth and family.Other than Lamentations, I cannot really place a book that comes out as grim as Judges.

The end-result being that many Christians avoid too much time in Judges, except in seeking a few hero stories like Gideon and Samson without delving too deeply into the milieu. Since Christians are hesitant to dig in here, it is unsurprising that many others are hesitant to dig in. On to that plane comes Timothy Keller’s Judges for You. This is published by The Good Book Company, and is available in hardback and ebook. 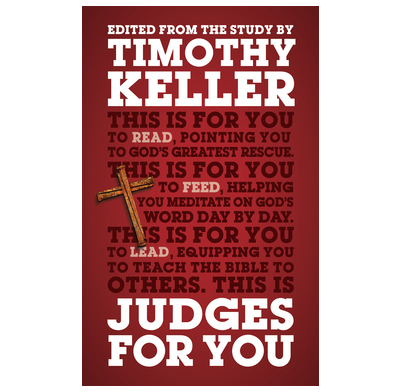 Judges for You is a study in the book of Judges looking at contemporary application. It is certainly expressed from a Christian perspective: this is more of a work to strengthen devotion than to contemplate academics.The goal here is application and inspiration.

In this, I find Keller’s presentation in Judges for You very helpful. He brings out usable points in the various segments of Judges. He also does not shy away from some of the questionable aspects of the stories. What about the morality of Jael’s hammer? How about the conquest in general? There’s an appendix that looks just at the moral implications of this action.

Feature-wise, this book is rich for its 220 pages. There is a glossary at the end to address unknown or lesser-known terms. There are maps and charts to provide a clearer understanding of the patterns in Judges.

There are a few drawbacks within the hardcover bindings of Judges for You. The first is the brevity, though this is good and bad. Clarity comes from brevity, but this requires Keller to not expound on several items. It certainly feels like more could be said regarding Gideon and Samson, for example, but time does not permit. The second is a personal quibble in terms of English translation of the Hebrew, and that is the decision to continue to use the small-caps Lord to render the Hebrew Tetragrammaton for the Divine Name of God. The glossary informs the reader of the actual meaning here, but fronting that meaning would have been preferable. The idea of the Divine Name of God and where it is and is not used are too valuable to be only in the back matter of a book.

This, however, is a minor quibble on my part. In all, to open Judges past an academic study on my part, Judges for You really helped open my eyes to some of the clearer applications of the Biblical writings. Keller’s presuppositions come through even as he presents both sides of an issue—like discussing gender issues in the church.

I gladly recommend Judges for You to those wanting to dig into this portion of the Old Testament.

I received a free copy of this book in exchange for the review.