Through the Whole Bible: Genesis 10

Here's another chapter that derails people on their "Read through the Bible plan." It's another long list of names, but this time it's not just a genealogy. Rather, what Genesis 10 (Link) contains is the words to put on a map. The descriptions, while containing some lists of ancestors and successors, contains where the different families of the descendants of Noah moved off to after the Flood.

If this were an interactive class, I would photocopy maps and hand them out to you, and we'd label locations. I'd advise you to grab a good study Bible and look up the area. 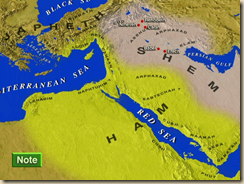 The names here do not have many that need highlighting. Nimrod shows up, and his legend outside of the Bible is bigger than this text supports. He is counted as "A Mighty Hunter"  but that's not really a positive. The idea is that he went overboard with his hunting: he possibly is the father of bag limits. He's the guy with the chariot with the big buck strapped to the hood, that type of thing.

He also forms a kingdom which is found in the same region the later Babylonian Empire exists. In turn, he tends to be blamed for lots of bad things, and there's nothing really to prove he was or wasn't responsible.

Yet what can we see in the rest of this? We see, partly, the spread of humanity. If you turn it backwards, we see that humanity comes from a small group of people and spreads from there. Which is not only theoretically possible, but something that even evolutionary science supports.

In all, though, what starts happening now with the narrative of Scripture is a focusing. The story moves from 'the world this' and 'the world that' into a more personal story. Even the story of the Nation of Israel is related through individual people in most cases.

What does that matter? It matters because of this: you're an individual person.

Because God works through individual people. Because the Kingdom of God is made up not of earthly kingdoms of men but of people like you and like me and together we are here to obey the Word of God. The idea is not that we should get one nation or another to obey God through the law but that we should challenge all people to obey God through the Spirit. In turn, the laws would reflect godliness in general.

Note: that's not to say one does not try to restrain evil through the law. That's really what good earthly law is: restraining evil. Law can never make a man good but it can stop his evil actions.

That's all for now…Genesis 11 coming up!