Today’s book was provided through Kregel Publishing on behalf of LionHudson Fiction. No money changed hands in the process, nor is there an expectation that my review will be anything but honest. 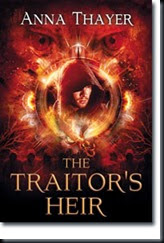 The cover of Anna Thayer’s The Traitor’s Heir looks like this:

Inside, of course, it looks like letters on a page.

The Traitor’s Heir is the debut novel from Anna Thayer, who is both an English teacher and a lecturer in the works of both C.S. Lewis and J.R.R. Tolkien. She’s no stranger to fantasy worlds, and has created her own here.

The world she has created centers on The River Realm, and we explore it through the life of Eamon Goodman. This world holds both magic and intrigue, though perhaps “magic” isn’t quite the right term. It would be more accurate to say that there is a more open metaphysical realm in this world than in our own.

At issue within the River Realm is this question: Who should be the ruler? Is it the Master? Is it someone else? And how does one tell the difference between power used of necessity and power abused of excess?

It’s not nearly as simple as the good guys in bright colors and bad guys in plaid. There are questions of loyalty, and the issue of whether or not someone can be honorable while serving the wrong side.

Plot pacing flows well through The Traitor’s Heir, and there is backstory aplenty for both Goodman and the whole realm. The characters are mostly fleshed out, with a few obvious gaps left for the further portions of the series.

Overall, I’d put this at a good read from high school on up. Content is very direct with warfare and violence, but not overly gruesome. It’s a good read, and a great start for a series I look forward to finishing.