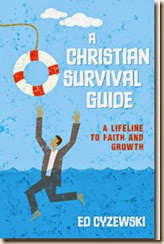 Look! A book that shows a guy with sense enough to kick off his shoes, but not take off his jacket while nearly drowning!---->

Today’s Book is brought to you by Kregel Publishers. It was provided to me in exchange for this review.

Ed Cyzewski’s A Christian Survival Guide is an entry in what I would call “minimalistic Christianity.” It is part of an overall trend to boil down the Christian faith to its bare bones, in hopes of helping Christians and would-be Christians avoid wasting time on silly debates or dying on hills that aren’t worth dying on.

Cyzewski’s aim, then, admirable. His writing is focused on maximizing Jesus. As far it goes, though, that’s the strength of this book. His aim is worthy, but his execution raises several concerns.

How so? Cyzewski takes a middle-of-the-road approach to nearly every debatable issue that he raises. Is there a Hell or not? Well, he’s not sure, so he points out that we should lead with the Good News of Jesus and not make such a big deal of it…because it might not be real, but it might be. Trying to play to both sides of the street is the best way to get by traffic going in both directions, though.

Further, the reader encounters quotes from theologians who downplayed the Bible, though the text tries to balance and say that the Bible is at least true enough. Except for that great question of how do we know that Jesus’ statement in John 5:39 about Scripture testifying to Him is the most important thing He said about the Bible, if we don’t know if He really said it? Cyzewski does not, despite significant effort, guide the reader through the minefield of abandoning a doctrine of complete inspiration of Scripture to a place where we can know anything at all.

I suppose this puts me in the group of grumpy church folks who don’t go for doubt, but I have never really seen myself this way. Further, while I have encounter a few Christian ministers who responded to honest questions with vitriol, they can be counted on one hand. The Christians who were certain that the Bible contained the truth, that staying close to Jesus meant reading and knowing His Word, have vastly outnumbered the angry doubter-haters. Reading this Survival Guide, I was struck by the difference in the Christians I know and the ones described in these pages. I would hope that we can find compassionate certainty as an alternative to surviving by discarding everything but a feeling of closeness.

This isn’t the review I wanted to write for this book. I wanted to like it, wanted to see a work that highlighted essentials without degrading everything else. This one, unfortunately, goes a step too far by extracting adherence to any sense of objective truth from Christianity. That just doesn’t work.