Book: Know the Creeds and Councils

Quick, tell me what Trent, Nicaea, Heidelberg, and Westminster have in common. Do you know?

If you are a Christian, it would be good for you to know. These are some

of the cities where groups of Christians have gathered to express the Christian Faith. While each of these, and others in Know the Creeds and Councils, were not perfect in their formulations, these Councils helped us know what Christianity is.

It is quite certain that, as a Believer, there is nothing to be considered as important as the Word of God Himself, or the Word of God as revealed in the Bible. Yet how do we explain what we know about God as revealed in the Bible as a Trinity? There is no one verse that uses this word, or that fully summarizes the concept. Instead, we formulate the expression of God in Three Persons to show what the whole of Scripture contains.

Likewise, how do we concisely explain the Jesus is fully God and fully man? This is an assumed, foundational concept in Christianity today, yet it took a few councils to get worded clearly. These beliefs, then, are not made up by councils and instilled through creeds but discussed and clarified, rooted in Scripture.

Unfortunately, most American Christians do not know their history very 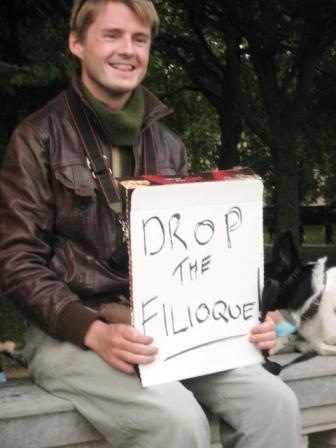 well. We are unaware of what this guy’s pizza box protest to the Pope was about:

And we need to know. We need to see and understand what the history of the faith is about, and how we came to understand that we believe in God the Father Almighty, Maker of Heaven and Earth.

Holcomb’s work here is valuable. He has provided an easily read introduction to the most significant creeds and councils of the Christian Faith, though he has somewhat focused on what we would call the Western World. There is still adequate information to provide background on Christianity as a global faith here.

Could more be said then Holcomb says? Without a doubt. He could cover Baptist formulations more in-depth, or he could note better some of the errors made by councils through the ages. Further, his introduction that covers the need for creeds was excellent, I would have liked a little more discussion on the danger of violently enforced adherence.

That being said, it’s an introductory book. If you put everything in an introductory work, it becomes an exhausting  exhaustive work, and you lose your target audience. Know the Creeds and Councils instead serves as an excellent springboard into discussion of where we have come from as Christian people. It will make for an excellent church group study, and also would serve for a study for seekers desiring to know more background on Christianity.

If only Zondervan and Holcomb had used footnotes, this would be a 5 star book, but separating text from reference and explanatory notes hurts the reader. Footnotes, publishers. Footnotes.

I received this book from BookLook Bloggers in exchange for the review. No influence was exerted on the review, but I’ll admit to having seen someone else’s copy of this, liked it, and so grabbed it free