Book: Tolkien: The Making of a Legend

When four of one’s books are made into six movies that will gross more money than some small countries, one must expect a biography or two to come out.

Of course, J.R.R. Tolkien doesn’t actually expect anything, having passed away in 1973, not surviving his beloved wife, Edith, more than a couple of years. Now I have spoiled the ending of Colin Duriez’s J.R.R. Tolkien: The Making of a Legend for you. That should not keep you from considering this biography of the man who presented us with hobbits, Middle-Earth, and the only part of the 2012 Olympic Opening Ceremony that made sense. (At least, I saw the Shire in it, and the rise of Mordor. Maybe I was wrong.) 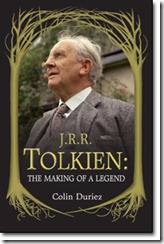 <----The book looks like this from the front. The link takes you to Amazon, but you can buy this book several places. It is from Lion Publishers, who provided me with the copy for this review.

I am not an expert on the life of Tolkien, nor on his writings. I do know that he was born, orphaned, lived, married, and died. I know that he fought in World War One and lost too many friends in that war. Truthfully, everyone did so—in that war and in any others. I digress.

Biographies of literary figures must navigate two hazards. The first hazard is to attempt to explain the lives of those artists without delving into their work. For example, to give The Hobbit a mention as being written, but to try and explain Tolkien without it. The other danger is the overcompensation that explains everything through the author’s works, trying to make all of the writings self-disclosure and autobiography.

Tolkien: The Making of a Legend has cleared both Scylla and Charybdis here, though Duriez drifted a shade closer to overdone literary analysis. The work does not fall into that pit, however.

Instead we receive a portrait of the life of Tolkien. We see how early tragedy gave way to more tragedy, but along the way brought the inspiration for the future. Tolkien’s successes are more addressed than any failures, his strengths more than his shortcomings, but this is not uncommon. Especially considering the subtitle of “The Making of a Legend.”

The writing style of Duriez is accessible. One does not get lost in deep literary analysis, and even the larger world setting of World War One’s events are explained enough that the reader does need fetch the encyclopedia to learn what battle occurred July-November 1916. This is helpful.

The horrors of war are addressed, as are the horrors of peace and tranquility, but there is nothing here to scare away the parent of a middle-schooler who wishes to preserve a measure of innocence in their student. Further, there is enough in-depth to be a good launching point for deeper study of Tolkien.

As always, I would have preferred footnotes to endnotes, but until I take over a publishing company I do not expect to see this fulfilled.

For a basic, popular introduction to the life of J.R.R. Tolkien, I can recommend Tolkien: The Making of a Legend without hesitation.