For those of you keeping up, here's the latest from two of our 'allies':

China wants 'guarantees' of US Treasuries. Translated: we own you, your government policy must be done in a manner that we approve of. Go ahead and run up your debt with 'stimulus' packages, because we'll just own you more, and control you more. It's the classic twist on the golden rule. Not the one the Lord Jesus Christ said, but the Wizard of Id version: He who has the gold, makes the rules. Yep. So, now, American financial policy will be driven by what atheistic Communists tell Secretary of State Clinton. Sounds exactly like what the Founding Fathers intended, right? The ones who bickered about the Constitution until Benjamin Franklin, Deist or whatever he was (probably not a Christian, but maybe), suggested that they begin each day with prayer. Sure enough, out comes a Constitution described by the 2nd President this way: "Our Constitution was made only for a moral and religious people. It is wholly inadequate to the government of any other." (Now, Pres. Adams may not have been a Christian either, but he certainly would disagree with China's official government religion or lack thereof, and certainly all of the Founders would spin in their grave that a government that denies freedom of religion, assembly, press, and reproduction [how is it that we hold a woman's right to abortion sacred in this country, even at the cost of the baby's life, and have put ourselves in position to be dictated to by a country that allows women no reproductive freedom at all?] will be telling the US how to handle our economy?) 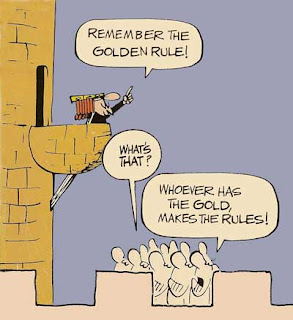 But that's not all! Look at this article from that bastion of civil liberties, keeper of the holy sites of that religion that is empowering to women: click here. Yep, this is Saudi Arabia and Islam. Don't kid yourselves, according to a publicly available legal databse the "Holy Quran is the Constitution of the country." So, loving, tolerant Islam stipulates that a woman who is raped is guilty of adultery and deserves 100 lashes and a year in prison? Never mind the added problem that she is now probably too damaged culturally to be married, and is at risk for being killed by her family to cleanse their honor. And realize that Iran is the same way, and these are the people that we want to talk to?

Anyway, it is getting close to time to hunker down and send lawyers, guns and money. The stuff is hitting the fan...
at February 11, 2009