Book: The Atheist Who Didn’t Exist 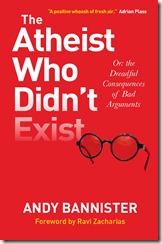 Today’s book is The Atheist Who Didn’t Exist, or The Dreadful Consequences of Bad Arguments by Andy Bannister. The foreword is written by Ravi Zacharias, who is well-known in most Christian circles as an author/speaker on apologetics issues. I’ve enjoyed his material that I have read, but it would take a lot for me to buy a book just for the foreword. Zacharias’ words are good, but not that good.

Instead, I would suggest you buy this book for Bannister’s writing. Now, I must start with a caveat: I picked up this book already sharing most of Bannister’s beliefs about the universe: we are both theists of the Christian variety. As I have only examined the arguments of atheism from the outside, I am not qualified to say that Bannister’s work will tear down the logical edifice of New Atheism and earn him a spot on the Mt. Rushmore of Evangelism (alongside the Apostle Paul, the Venerable Bede, and John Bunyan.) He may be that persuasive, but I already agreed with him so finding that I continue to do so at the end of the book tells us nothing.

This highlights what is, perhaps, the main flaw of this book: what audience is it intended for? I am more thoroughly convinced atheism is wrong than when I started, but my belief in a providential God who got me safely through traffic to work today also supports that. The slightly jesting tone may annoy those who are the target of the jests more than enlighten them, so I’m not certain the work will persuade many atheists.

Perhaps the best guess at the audience is two groups of people. The first are those who are headed into atheism because they find some of the arguments of the “New Atheism” attractive but have not thought fully through them. Bannister’s work will drive at least a few people to think more clearly before they make the leap.

The other good audience for this book are those Christians who are intimidated by the vocal advocates of the New Atheism. The folks who see the Facebook threads or hear the rantings on television advocating that religions are always all bad. Many times, believers feel they are on the wrong end of the argument, holding on by a mere thread of faith. Bannister’s work should enlighten the timid to this reality: all philosophical viewpoints involve some rational leaps. And this includes those who assert that their belief isn’t really a belief.

In all, I’m pleased with this book. I would love to see the same rigor applied to some of the logical arguments for God that has been put onto the arguments for atheism. (Note that this book is as much about the arguments for a specific belief system that is atheism, not for or against the existence of God.) I have found that wanting another helping is often the best sign of a good meal, and likewise with writing: wanting another indicates that this one was pleasurable.

I think The Atheist who Didn’t Exist is worth your time to read.

I did receive a copy in exchange for the review.