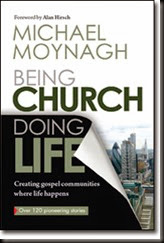 In Being Church, Doing Life, Michael Moynagh pursues the answer to this question: what does it look like when we separate church as “worshiping community” from church as “cultural activity?”

Because let’s face this up front: in many places, especially Moynagh’s United Kingdom and my United States (the Southern part!), church is endemic to culture. It’s just there. We have churches, we have churches everywhere. And there are cultural constructs connected to the idea.

Yet decades of cultural evolution have resulted in a cultural church that is not quite the same as what a worshiping community would look like. So, how do we sort out the differences?

By analyzing examples, primarily drawn from the UK but some from the US, Moynagh presents many non-traditional looks at worshiping community structured around the normal beats of life. These ideas are naturally inspiring, and should challenge us to think outside of the box.

I like his concept of developing witnessing community alongside Christian community. This is a great slice into how I have been asking the question for several years: is the one hour we meet on Sunday morning intended to strengthen the believer or reach the nonbeliever? It is difficult to do both at the same time with any faithfulness or completion.

Moynagh here emphasizes the development of the “reach out” aspect of community. I would suggest that this hinges on an assumption that people will move from reach-out community into Christian community where deeper questions and different problems are addressed; after all, some issues do not surface until one is actually trying to follow Jesus.

In this, I think there is a clear risk that someone will take Moynagh’s book as if it is the only path for all churches to follow. That is not on the author—it’s on the reader to balance Moynagh’s emphasis with a completed Biblical ecclesiology. As an aside, Moynagh stresses that Jesus didn’t write a book but formed a community. Yet he writes a book—and has written several. That makes this statement a line that has emotional punch but has no value. If books are bad, then why be an author?

Building on that statement as an illustration, what I find as the major concern here is Moynagh’s general de-emphasis on Scripture. While he routinely points to verses, he still pushes a bit toward the shallower side, as if a drop is enough to fill the bucket of a soul. I’d suggest that it’s not, but I will also state this: I don’t think Moynagh’s out to produce a complete text on all the aspects of church here. I think he has highlighted one facet of a diamond.

As an illustration of that facet, this is a good work, and one I would recommend. Especially among those of us who are in stabilized situations where the church is swimming along without turbulence, and needs to reach out differently. This will shake up the viewpoint.

But realize that the ideas here truly depend on having a deeper community to draw people into, whether it looks like a traditional church or not.

I think it’s worth your time as a pastor or church leader.

FOR THIS WEEK (9-22-26) ONLY! CLICK THIS LINK FOR A DISCOUNTED EBOOK PRICE FOR BEING CHURCH, DOING LIFE:

Free book from Kregel Publishers for the review.