This post may be a little longer than blog experts suggest, but, you'll live.  I think it's worth it.

One of the things that I have been studying through as I'm preaching Philippians is legalism.  Philippians is similar to Galatians and Colossians in content, and all three address, at least once or twice, the concept of legalism in the Christian life.

Meanwhile, I'm also reading through the book of Romans, which is going well.  Slowly, but well.  There's much in Romans about law and grace and following God.

Add to that the pastoral role I hold, where I am frequently striving to help people find and follow God's will as well as guide a whole church in that direction, and I've been pondering pathways and staying on them recently.

So, let's push through the concepts here, and I'll try and tie this up before it's all over with.

I've long tried to explain legalism in terms of playing in the street.  As a parent, I understand this.  I find it acceptable, for the most part, for my kids to play in the yard, but I don't want them to play in the street.  The street is dangerous, bad things happen in the street.  Can bad things come into the yard? Certainly.  Bad things can happen in the house.  We've had some knuckleheads in Monticello celebrating the New Year by firing guns in the air.  Loaded guns.  Those bullets have to come down somewhere, and at least one came down in a child's bed.  However, you're still much safer in the yard or in the house than in the street.

Now, imagine the explicit commands of Scripture are all, basically, telling you not to play in the street.  This is, by the way, true.  We break down sin into groups and categories.  Sin is failing to be perfect as God is perfect.  Does it matter that much how we each miss it as much as that we all do?  Anyway, God gives commands in Scripture that are there to keep us from playing in the street.

In the past, I've explained legalism as being the fences we put up that push the boundaries back from the street.  For example, an expression of sin is adultery.  So, don't have sex with someone you're not married to.  The Lord Himself expressed that unfaithful thoughts are also forbidden.  That's the commands to stay out of the street.  Now, we put up a fence: we don't listen to certain types of music or watch certain TV shows to make sure we don't accidentally slip into this.  Now, certainly, the music we listen to and the shows we watch impact our hearts and minds, and we ought to be careful.  But Janet Jackson's infamous 'wardrobe malfunction' didn't cause people to lust that weren't doing so already at the rest of the performance.  The main version of this I've seen is the "We don't watch rated R movies" fence.  Except that movies aren't rated strictly on their conformity to Biblical standard.  Else, Titanic is fine and the Passion of the Christ isn't.  Really?

But by erecting a fence to back us up from the street, while we might be safer, we are also missing a portion of what God has given us the freedom to choose from.  The more legalistic we are, the farther back we build the fence, the more we miss.  Is the protectionism warranted? Sometimes yes, sometimes no.  Is it done from a heart of meanness? Not always.  I don't let my 3-year-0ld play outside without a fence because I love him.  Some of the fences we build are to show our love and our understanding of human weakness.  However, there are times we need to tear down the fences and examine the freedom we have.

That's long been my definition of legalism.  I think it's a mostly accurate analogy, although all analogies do break down.

In fact, it's the breakdown of that analogy that I've been thinking about it.  Christianity is not just a matter of playing the yard.  It's the act of living life in obedience to Christ and becoming more like who God created you to be every day.  Just staying and playing in the yard, really, becomes sinful.

So I'm thinking the analogy is reversed.  Rather than the commands of Scripture and the guidance of the Holy Spirit being a matter of keeping us out of the street, these things keep us on the path.  And the path that comes to mind is the Lake Pontchartrain Causeway. 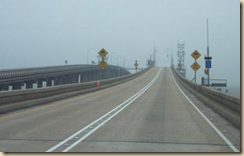 You know, the 24 mile-long bridge over Lake Pontchartrain at New Orleans?  It's quite the bridge.  I've been on it.  Then I followed it by driving I-10 across south Louisiana.  It's basically a long bridge through a swamp.  I could hear the gators….

Anyway, conceive of the Christian life as following across the Causeway.  Sometimes it's clear and you can see a long way down the road.  Sometimes it's foggy and you can't see anything.  There are other travelers, moving at different speeds.  Sometimes they're even in different vehicles and different lanes!  Those things represent the freedom we have in Christ.  We are free to choose, but obedience will expect us to choose from a limited scope of options.  It's not much different than the freedom a ball player has.  A running back is free to run wherever he wants, within certain boundaries.  He's also not free to bring a hockey stick or baseball bat.  So, there is freedom, but obedience keeps you from selecting many of the options.

Obedience keeps you out of the water.  Which is a good plan on the Causeway.  It's a great plan on I-10, because it keeps you away from the gators!  So, you have freedom to choose aspects of the path.  You have consequences for straying from it.

How does legalism fit?  Legalism restricts you to one lane.  Perhaps legalism restricts you to walking along the shoulder.  Maybe legalism binds you into the fast lane in a high-performance car.  Either one is not the only way across.  There will be times for walking and times for driving.  Legalism sticks you in a spot and then claims that all these people passing you, driving around you, maybe even walking alongside of you aren't really going the same way you are.

Whichever picture works for you, I hope that brings some understanding.  I also hope we'll realize the need to back away from some of our legalistic tendencies, including our legalistic judging of other people we think are legalistic…

What do you think?

Email ThisBlogThis!Share to TwitterShare to FacebookShare to Pinterest
Labels: Galatians