This week, I am participating in a book review project for the book Understanding World Religions in 15 Minutes a Day. The book is published by BethanyHouse Publishers, and they sent me a free copy of the book to entice me to review it. All they enticed was the review, though, they did not require any level of review. 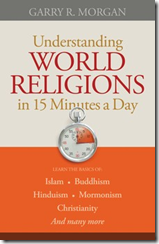 Understanding World Religions in 15 Minutes a Day by Garry R. Morgan is a short primer on more than twenty religions practiced throughout the world today. The obvious focus is on world religions that impact on world culture and American culture, but one of the good points present is that any major religion in the world impacts on those items in the modern day.

On point, UWRI15 presents us with a challenge. Is it really possible to understand another person's belief system in that short of a time investment? The author acknowledges that he presents a brief summary and not an in-depth treatment.

What is there to like? First of all, comprehensiveness. While someone will find a religious movement left out, Morgan has presented most of the major world religions. This includes groups with fairly small numbers like the Sikhs and Jainists. Second, differentiation. He presents Nation of Islam separate from Islam, and rightly so: the two are different, though related, religious groups. Third, even-handedness. While I think Morgan shows his Christian preferences in the text, he does not attempt to present religious counters to the beliefs of others. Fourth, fast-reading. Each chapter averages four pages, which allows for quick reading. Fifth, going deeper. A few religions, namely Christianity, Islam, Hinduism, and Judaism, are given multiple chapters to flesh out more of their story.

What is there not to like? Primarily this: while Morgan uses some in-line citations, there are no footnotes, endnotes, or other comprehensive references in the text. Admittedly, he is Professor of Intercultural Studies for Northwestern College, so he knows the facts and information, but there is no built-in reference section to verify his statements or conclusions. The secondary dislike is related: for one not satisfied with the basic knowledge acquired in 40 days of 15-minute reading, there are no suggestions of where to go next. If I want to know more on Eastern Orthodox Christianity, where do I go? What about Jainism or Scientology (well, other than Tom Cruise)? A bibliographic section would have enhanced the value of this book.

One minor quibble someone may have is with the book's section on the Unification Church: UWRI15 was written before the recent death of the founder of that church. So, his death is not mentioned and this makes one statement in UWRI15 inaccurate about who the leader of that body is.

I did receive a free copy of this book from the publisher.