Well, it’s time for another book. This one is provided to me by Kregel Academic. As always, a free book doesn't buy a slacker review. Of course, I get to pick the books I review and do have a tendency to pick ones that look good to me. 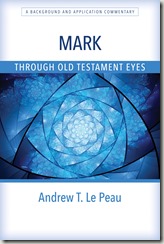 Le Peau’s Mark volume is the first one in this series, which I hope to see come to a full set.

Mark opens with a great introduction. Le Peau starts with the movie Toy Story, works through Star Wars and then hits Lord of the Rings. From that point, I knew this was my kind of book: one that delves deep while also providing a light touch. The introduction does not disappoint, using these movies and other popular culture items to illustrate how one work can sit in the background of another work without standing out too clearly. It’s excellent.

From there, the work turns to the structure of Mark and finds definite parallels between Mark and Exodus. He also notes the chiams in the Mark narratives which he calls “sandwiches,” which is a great illustration. The introduction also gives the normal background of identity, but does not draw any conclusions on the overall meaning. Le Peau instead puts the conclusions…at the end of the book. He ties his conclusions to Mark’s conclusions. It works well.

The end-result is a commentary that reads well even if one is just seeking a book on the Gospel of Mark to read, but is even better as part of intentional study efforts. The looks at longer passages and how they parallel Old Testament structures and passages are excellent and shed a different light, at least for me, on the text.

The general approach treats the text of Scripture with respect and does not attempt to warp it into a particular viewpoint. However, the basic assumption is that Mark is a single unit and should be considered an authoritative source on the life of Jesus. Shades of greyscale boxes are used to pull out some sections.

The endings of Mark are dealt with well, acknowledging the difficulties with the textual variances after 16:8. As a conclusion, Le Peau holds the idea that our current Mark 16:9-20 are not original to Mark, and he then presents the pros and cons of Mark intending to end at 16:8. He does not give a definite conclusion beyond noting the tension.

I’d rate this one as a great buy, to fall right after a good commentary on the Greek text of Mark. I hope to see this series continue if all the volumes are anywhere near the quality of Mark through Old Testament Eyes.