Well, we just had one sermon on Sunday. The evening, some of our choir members particiapted with the East Union Choir Special. With Music Minister Ed Skains out after his heart surgery and me in Monroe with my mother before her surgery, we trusted the choir to handle it. I’m told they did quite well. 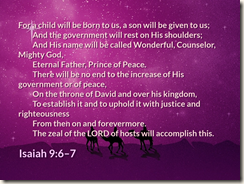 Title: He Shall Reign!

Primary Theological Point: What should we learn?

(BEDE)! Surely the entire divinely arranged plan of our Redeemer’s [coming] in the flesh is the reconciliation of the world—it was for this purpose that he became incarnate, for this he suffered, for this he was raised from the dead—that he might lead us, who had incurred God’s anger by sinning, back to God’s peace by his act of reconciliation.

By his deeds and his teaching he moved sinners, so that he would be killed—he who, by his bodily death, was able not only to heal those who were ailing spiritually but also to bring the dead back to life.

The light of life rose for those of us dwelling in the region of the shadow of death. Homilies on the Gospels 1.6.1

Chrysostom: Listen to how Isaiah predicted this long beforehand when he said, “and his name shall be called Messenger of Great Counsel, Wonderful Counselor, God the Strong, the Mighty One, the Prince of peace, Father of the world to come.”

No one could say this of a mere man, as is obvious even to those who are very eager to show how stubborn they can be. No man from the beginning of time has been called God the Mighty or Father of the world to come or the Prince of peace. For Isaiah said, “There is no end of his peace.” And what did happen makes it clear that this peace has spread over the whole earth and sea, over the world where people dwell and where no one lives, over mountains, woodlands and hills, starting from that day on which he was going to leave his disciples and said to them, “My peace I give to you; not as the world gives do I give to you.”

Why did Christ speak in this way? Because the peace which comes from a human being is easily destroyed and subject to many changes. But Christ’s peace is strong, unshaken, firm, fixed, steadfast, immune to death and unending. Demonstration Against the Pagans 2.8–10. 1

Primary Practical Point: What should we do? Be reconciled, first to God and then to others.//

Take Home Action (spread the Kingdom): Find one person to deliberately show the love of Christ to....and meanwhile, stop stressing about the "war on Christmas" and realize that the Kingdom has never lost a war, and never will.

Also, here’s the special music from the day. With appropriate credit to Chris Tomlin for it.