Book: The Bible in Pop Culture

The Bible in Pop Culture by Kevin Harvey 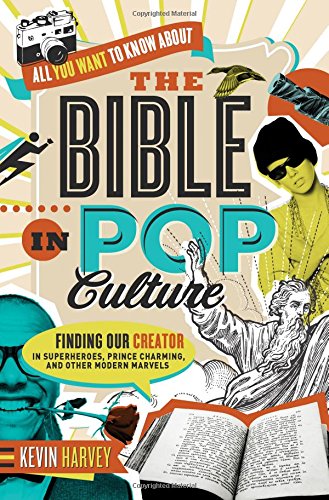 I had high hopes for The Bible in Pop Culture. After all, finding hidden gems of Scriptural truth in some current media would be a great tool—plus it would provide some guidance about what to spend my personal media consumption budget on. And with some shows and songs truly falling into that “hidden gem” category, surely I’ve missed some and will find them here.

Unfortunately, I found the overall work uneven in regards to its goal. First, on the “pop culture” front, there are some difficulties. For example, while I love Joss Whedon’s Firefly (and the reference to Firefly in a description of this book is why I snagged it,) a show that failed after 13 episodes…in 2002...might not be truly part of “pop culture” over a decade later. True, there’s always a hardcore Browncoat fandom—but to count Firefly as current seems a bit off. As does using it to exemplify that Hollywood is willing to allow portrayal of not-fruitcake-Christians like Shepherd Book. He is, after all, one of (SPOILER!!!) people killed off in the movie. (Which, to vent a bit, was not unexpected—who does Hollywood kill? The compassionate Christian minister and the happily married guy, that’s who. Both of which are who I want to be, so I stay out of Hollywood. They want me dead.)

Further, the pages on Lost reflect the same “dated” feel for pop culture. How I Met Your Mother ended more recently, and Batman’s due for a reboot from the mentioned movie series—all of these push “pop culture” back a few years.

Additionally, the Bible portions run between the obvious and clichéd, like any form of self-sacrifice should remind us of Jesus, to the over-stretched, like Barney Stinson as a good role model for being an “encourager.” After a few of these stretches, I was having difficulty determining if the goal here was to show true Biblical value in Hollywood or just to justify certain shows and movies—after all, no matter how graphic the violence in The Matrix, at least we see the Christ-figure of Neo in his dying and rising. Add in the love interest of Trinity and it has to be holy, right?

This isn’t uncommon, though, for many of us as we wrestle with our media choices. I find myself looking for redemptive content in music that I know isn’t going to have it—and then using what little I find as a springboard for conversations. As I finished reading this, I was beginning to feel I was being to harsh. Yet I keep coming back to Harvey’s reference to pop culture containing “half the Bible” and the need for the “Jesus half” (p. 146-147 is its clearest statement). I cannot get past this concept—because one half is equal to another half. But there is no “half” of the Bible that is not about Jesus, and I am not persuaded that the smattering of Scriptural concepts, hidden and masked as they are, in pop culture are equal to the clear presentation of the Messiah that we find in Scripture.

Unfortunately, too much of the Bible that is in pop culture is just that: masked and hidden. Harvey has tried to take the mask off, but it is, to use another cultural reference, like freeing the man in the iron mask to discover…he is nowhere near healthy enough to take the stage as a leader, much less a king. Culture’s Bible is so diluted that there’s nothing left to see, despite Harvey’s best efforts to pull it out.

His work is admirable, but falls short in attaining the impossible. Some forms of art should perhaps be judged merely by their own merit, rather than attempting to impute righteousness where there is none. I wanted to like this. After all, FIREFLY! But I just can’t count it as a needed work.